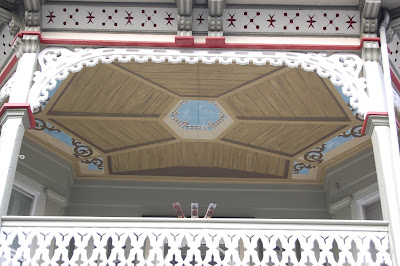 I'm posting more pics of Cape May while I continue my sew-a-thon. DH is gone for two weeks and I am taking this time to sew, sew, SEW!!! Since I am working on secrets and xmas presents, I am really not ready to post much. Still trying to figure out who (in the family) reads the blog and who doesn't. Meanwhile, enjoy some neat painted ceilings (above is a balcony ceiling and yeh, that is PAINTED), the Pink House, and some gulls on the beach.

I'm feeling so good, it might even be time to break out the Christmas music. :)
Hopefully I will get enough done to spend my evenings binding while we watch tv (once the hubs is home again). I'd show you a pic of the sewing room but it is a holy mess and that is what a sewing room should look like when you are getting things accomplished! 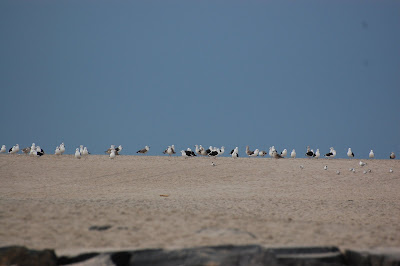 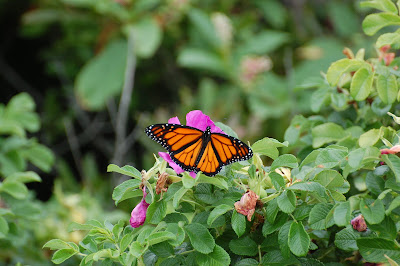 The monarchs are everywhere and are migrating south.

The sunrises are wonderful :) 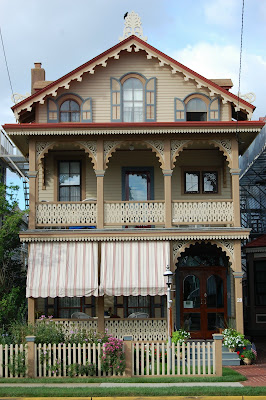 And the houses are still delicious to view!

I took about 500 pictures, too many to post but many good ideas and inspiration. Its good to be home and sewing again. Today is Monday which means visit Nana today and then work on cleaning up from the weekend.
I'm also starting a two week sewing marathon while my hubby is away on a business trip to Seattle. Should be a lot of fun to get some things done!!!

Linda and I are enroute to the beach. Hope you have a wonderful weekend!
Posted by Michele McLaughlin at 7:35 AM 1 comment: 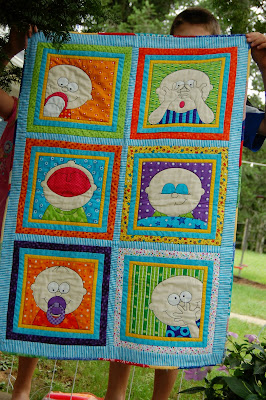 Here's a wallhanging I just finished for our soon to be grandson's room. I love these Amy Bradley panels--this was an older version I got a few years back for when more babies arrived. When I get back from the seashore, I will be quilting his crib quilt (with a bit more subtle colors).

Posted by Michele McLaughlin at 8:56 AM 5 comments:

We're expecting rain and my rose buds never survive a good storm. So I took some time to fill a few jars full of flowers and distribute them to friends and my Nana.

Autumn used to make me sad but now I look forward to my late bloomers and the roses at this time of year are truly spectacular. There is so much to look forward to this season: baking, quilting, cleaning out the parts of the house that become too warm in the summer (attic and basement). This week, my friend Linda and I are going to the shore for a long weekend/girls retreat. It's the perfect end to the summer for us and we are both excited to just walk on the beach, gab, and read.
Posted by Michele McLaughlin at 5:24 PM 1 comment: 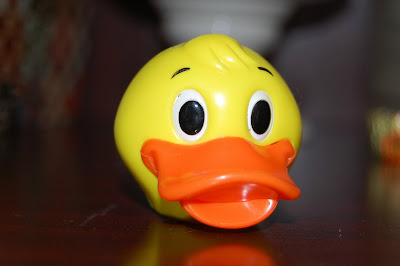 This is duck--or rather the duck head that rolled out of the toybox that Nana was cleaning.
It quacked the whole time it rolled and must have been an Easter toy that Helena had broken. 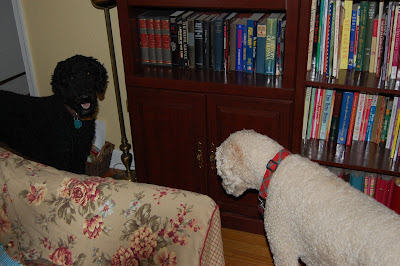 These are the puppies that ran to the duck head as it rolled out of the toybox and quacked it's way to the living room. This was much needed excitement at 3P and N!!!

Seamus assumes the puppy bow position although he isnt' quite sure he wants to bite this duck. 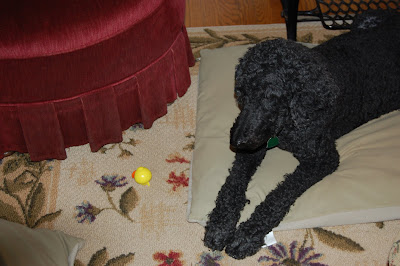 Ted isn't sure what to make of it either but he likes when it rolls, he did put it in his mouth but decided it didn't taste right, probably because it is missing orange sauce. 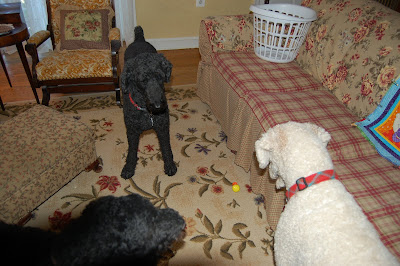 The old broad decides the kids are having way too much fun. She doesn't want the duck, she just wants to remind them of her rank. Although the boys are way bigger than her, they won't take her on but stand respectfully until she tires of this and goes on her way (hence giving her a little bit of fun). 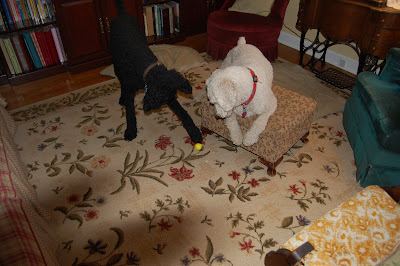 This thing is so great. Teddy becomes the Ottoman Emperor and lets Seamus take on the duck. 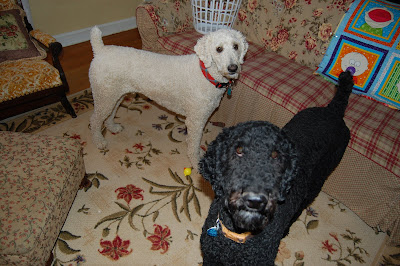 Now don't you wish you had a duck too?
Posted by Michele McLaughlin at 12:12 PM 2 comments: 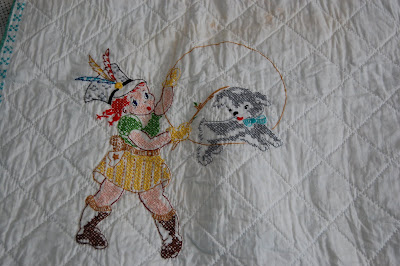 This is the first year I can remember actually enjoying Autumn. I like just slashing things in my garden and purging excess there and in my house. I love sewing on these cool and grey days and I am getting close to finishing things. All this and I am going on a mini holiday to the sea shore next week and will take along some handsewing for after sundown. Life is good :)

Posted by Michele McLaughlin at 8:08 AM No comments:

It's early Sunday afternoon. I'm in the middle of piecing a new lap quilt. And then I realize it's 12:50 pm! I need to rush downstairs for BRIAN!!!!!
It's true: I finally found a man that makes me want to be on time.
It's a rarity that I post about a tv show but I am soooooo enjoying Brian Boitano's new show on the Food Network: "What would Brian Boitano Make?" that I just have to encourage everyone to check it out.
I know what your saying......the same Brian Boitano who won the 1988 Olympics? Yup, that one. Turns out, Brian is one heck of a cook with a great sense of humor which makes the show a concoction of fun, culinary expertise, and camp. This show is funny enough to make me burst out laughing but YET, each time I watch it, I learn at least one (usually more) new technique or recipe that I just HAVE to try. It's what a great cooking show should be and all too often is not.
Two other reasons to watch the show: The first is that Brian thinks outside the box with his recipes, reminding us that we can think of topics in a variety of ways...his ideas are wonderfully creative and clever. I mean who would break the recipe of paella down to numerous appetizer recipes or put an Italian twist on coq au vin?
Brian celebrates the ordinary. Yesterday the show was a dinner party to mark his friend's sixth month of motherhood. There is clearly a joy in Brian that he wants to share and that IS contagious. I like his philosophy. Now that I am well into middle age, I believe if we don't have reasons to celebrate that inventing some is about the most wonderful gift we can give ourselves and those that surround us.
For me (in my funk these days) it is a really positive way to begin my week. Shouldn't we all start our week with a dollop of inspiration, a cup of creativity, and a belly full of laughter?
WATCH THIS SHOW. Food Network has it on a difficult time: 1 pm Eastern. It's a tough slot to gain followers so I want to urge you to check out Brian's show. If the Food Network is smart, they will start running this show in the evenings--a good match would be to pair with the Ace of Cakes.
(photo from Food Network)
Posted by Michele McLaughlin at 8:07 AM 1 comment: 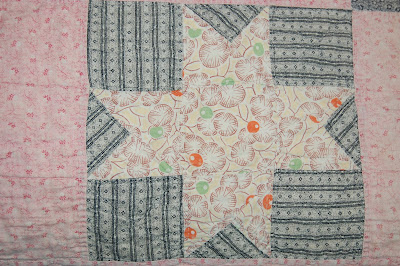 The days are shorter. It has gotten brisk and damp. It seems the days of Autumn approach. I gave up lamenting about the end of summer long ago and now just prepare for a season of sewing, baking and garden reorganizing.

I'll miss the hummingbirds. My desk is aside of the window and I can look out and see them dipping their beaks, warding off bees, and resting on the perch of the feeder. We had a baby hummer this year and I just adored watching him grow. Hopefully, he will remember where the good eating joints are next summer.

Our granddaughter began kindergarten this year and now we don't babysit her during the week. In some ways, this is a good thing. I have a lot of other family members to check on and I need to catch up with some much needed household chores.

And the sewing! There is so much to be done in my room that I can barely move because of the piles. I need a few good weeks of my husband away on business to get some more done ;). This week he is going fishing so I should catch up a little bit. Meanwhile, Christmas approaches and I am still debating about the dog quilt I am making for BIL and his wife. More on that later.

Well we are off to visit friends today and take our Helena out to lunch to hear all about her first week of school! Should be fun :)
Have a safe and blessed day!
Posted by Michele McLaughlin at 8:36 AM No comments:

This is one of my many projects in the sewing room these days. I took a workshop recently and one of my buddies did a scrap quilt with various coffee/taupe tones in it. To me, the effect was charming. I know the absence of color is not everyone's cup of tea but right now I am enjoying working with these fabrics. This is a very soothing quilt to work on. The blocks are easy and I like the combination of taupe tones. Should make a decent lap quilt down the road but I am still making the mini blocks. Anyway, I thought I would share some of what I am working on now that Helena is in school.
Have a great day :) 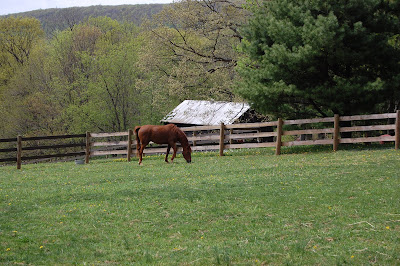 Today we are going to visit Linda and Jim at their farm, Kal-May Arabians! I'm taking my camera to get lets of photos! I love LOVE taking photos there. DH has never been there because of his work schedule and we are really looking forward to getting out in to the country for a day! :)
The poodles are tired out from so much excitement yesterday that is a good day to leave them home to rest.
Have a safe and happy Saturday!

Posted by Michele McLaughlin at 10:09 AM No comments: 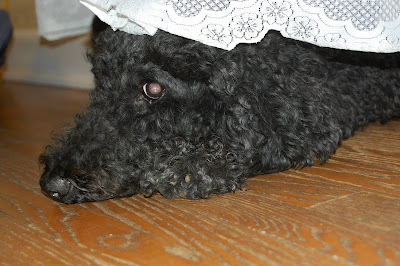 Paddie says: "RELAX, it's Labor Day weekend!" We have a lot of things we are doing this weekend, starting with lunch with a new friend today and company this evening. Looks like it is going to be a lot of fun for us! What are you doing this weekend?
Posted by Michele McLaughlin at 6:40 PM 1 comment: 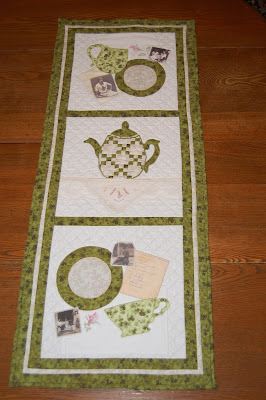 Our guild has a challenge every September meeting. We were to take a normal name of a quilt block and change one letter in it or rearrange the letters to invent a new quilt block. I made Irish China out of Irish Chain. I used photos of my grandparents and my Dad and also copied Nana's recipes onto fabric. 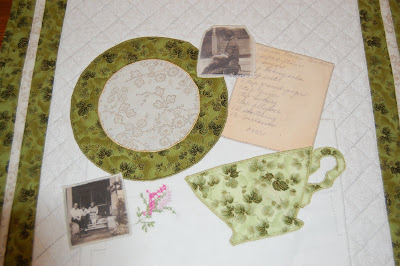 Here's a close up. I think I found the cups and teapot on fatcat.com as a free download. The embroidery is actually a photocopy of Nana's embroidery. When I was a little girl, all my pillowcases were embroidered by her. 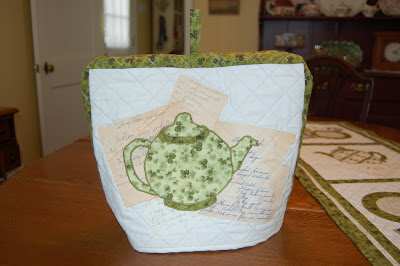 We were supposed to do 4 blocks but my wallhanging was getting too big. I made a matching tea cozy with the remaining teapot and recipes. Thats all for today!
Posted by Michele McLaughlin at 4:11 PM 4 comments: