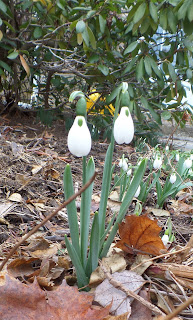 I like the early signs of Spring!
Okay, to be honest we are in the midst of a false spring.  I love the light that comes with the spring season.  Solar spring began in early February.  It makes me happy to get up early with the sun and I love the light!  However in February, we are not supposed to see daffodils buds surface: 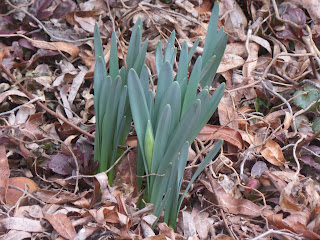 Of course we could still get another snow storm, but the plants that I see surfacing will be able to take the snow.  Spring means there is a LOT of work to get the garden ready, and even more so with a (hopefully) new puppy arriving later in the spring.

For now, I'll enjoy the early blooming jasmine that is beginning to bloom: 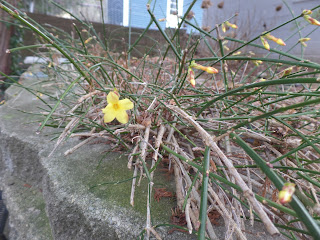 And the rose bushes are awakening with little leaves peeking from the branches: 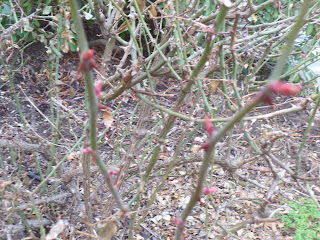 A month ago, I found a spring-like baby quilt that I had to purchase: 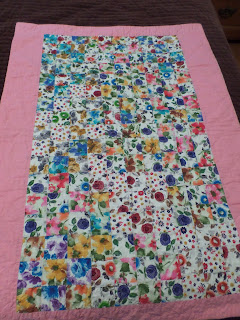 I like the color in this piece.  It reminds me of a watercolor and was made in the late 1950s-early 1960s.  I'm posting this for our hostess-with-the-mostess, LeeAnna from "Not Afraid of Color".  She created these Thursdays celebrations and you can explore more blogs with this theme by going to her blog. 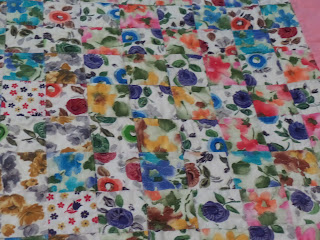 Have a wonderful day!

Posted by Michele McLaughlin at 8:55 AM 9 comments:

LeeAnna at Not Afraid of Color sponsors a day of positive energy!  It's I Like Thursdays!!!  The number of people participating continues to grow, you should join too!

I like antique and vintage quilts.  I just really like quilts but as an historian, I find researching old quilters is facinating.  All throughout the United States--and other countries as well, there are small quilt study groups where people meet to look at old quilts and try to learn from what they are inspecting.  Our group here is simply the Lehigh Valley Quilt Study Group.  If you are interested in a group like this (in your area) why not do a net search or check out the American Quilt Study Group here. 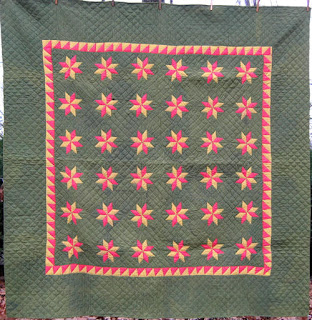 I have a second blog called Pennsylvania Piecemaker and often I feature the quilts that we see at our local quilt study group.  Feel free to peruse it here.  I know I haven't been as faithful to blogging there but I am hoping to get back in a groove again.

One of the things that still jolts me is when quilts from my era are now considered "vintage" like this robin quilt.  It was probably made in the 1960s or 1970s and is polyester: 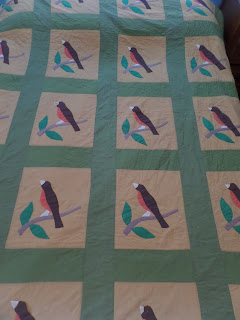 But there are good things to aging.  I find it amusing to check on the oscars or grammy awards because I am sooooo out of the loop.  It's such a relief to NOT CARE about pop culture.  Sorry but I need my brain cells for other things that I consider more important.  I come from a family that valued music but since my Dad died, I haven't been following much of what is going on.  I just listen to what I like and after all, that is what we all should be doing.  My favorite music these days (yes, I go in phases) is music from the 1960s.    It's happy music and I like that I know all the lyrics :) 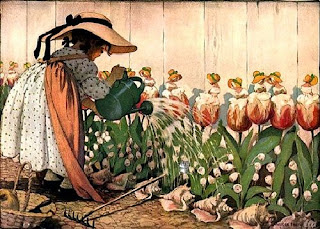 31 days until Spring!
I think we all like counting the days until spring!  It was warm enough to actually do some gardening work this past month.  I did not put the garden to bed (for winter) last fall.  I'm only now cleaning up dead leaves and debris.  I'm comforted by one thing--that I spent time with Seamus in the fall instead of cleaning out the garden. 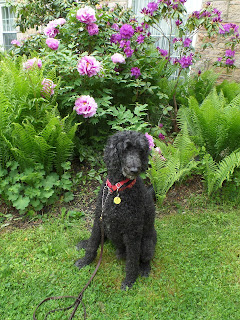 Seamus last spring posing in front of the tree peony.
We are hoping to get a puppy in the spring but it's been a decade since we've had a puppy.  I've reordered my favorite book on dog training: 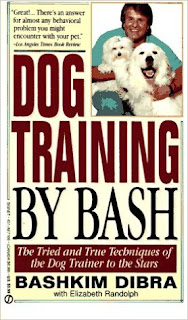 This book hasn't been in print for many years but my whole family swears by Bash.  The best part of the book is the puppy training schedule.  The schedule is so detailed, Bash relays how many minutes to wait after a puppy eats to put the pup out for business (and it's right on the money).  I have had to order this book so many times because I've loaned it to friends with puppies and I never get it back.  Fortunately for you, if you want a copy of this book, you can get it Amazon for about 1 cent (seriously).

Well that is all for this week.  Have a very happy day!

Posted by Michele McLaughlin at 7:37 AM 6 comments:

It's Thursday and you know what that is!!  We celebrate as a positive day with our hostess-with-the-mostest, LeeAnna, at Not Afraid of Color. 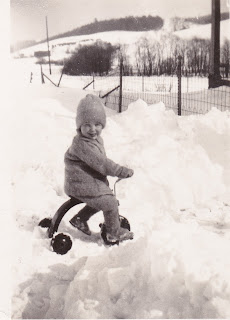 Yesterday the high temperature was 64 F.
My daughter-in-law was just lamenting that she just wanted "one good snow."  She no sooner put that out to the universe when the snow prediction for today went from a half inch to well... we are at 5 inches at this point: 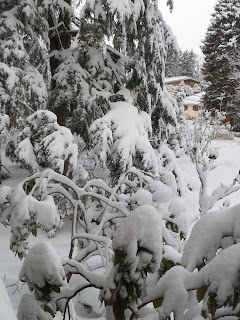 I used to hate snow days because I hate driving in the elements but now that I get to stay at home, I do enjoy it.  My neighbors plow and dig me out and in return they request these: 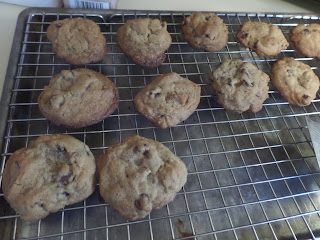 So this morning I am baking and visiting our elderly neighbors and it is all good.  This afternoon I will sew.

2. I like roses, especially pink ones.  My husband appreciates roses too.  We used to baby our tea and hybrid roses but now we enjoy hardier rose bushes.
My brother designed and created my sewing room and it features my love of pink roses: 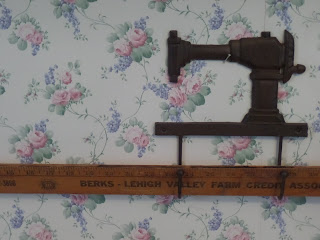 Even the ceiling has the wallpaper on it: So my new quilt will feature rose fabrics and is two sided, side one (the calm side) is pictured here.  The back will be all rose blocks and be a wild garden of flowers. 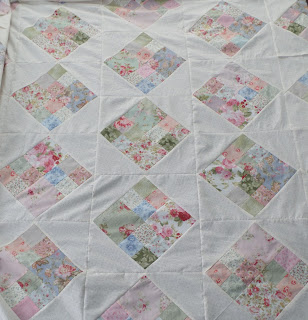 3.  I love old photographs.  I am always picking up a few at flea markets and auctions.  I prefer photos of children, ladies, and gardens--but to be honest, I have a wide variety of photos that simply appealed to me.  Here is one that seems appropriate for my rose garden love: 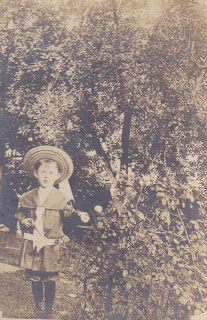 Have a wonderful day and if you are in the snow zone, stay safe and warm!

Posted by Michele McLaughlin at 11:10 AM 4 comments:

Just a fun lap quilt to give to some little girl someday.  I made a simple pattern so that the quilting could be highlighted. 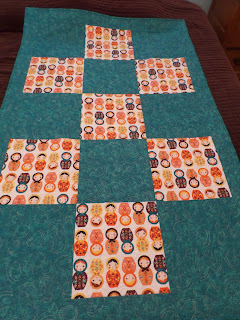 Because the quilting was matroyshkas!! 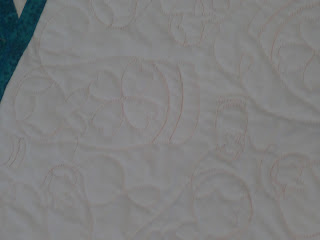 This one is a gift: 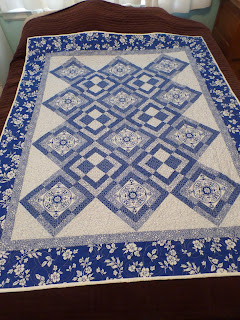 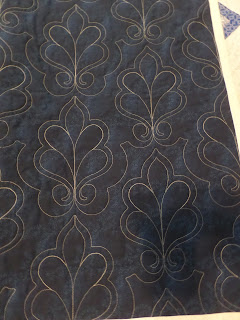 I've actually completed 6 projects in 2017 and I need to take some more photographs.  I'm sewing a lot these days.  It's winter.  It's what we do :) 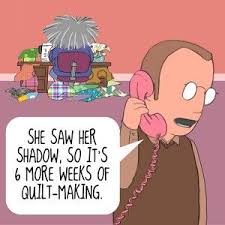 Posted by Michele McLaughlin at 8:14 AM 4 comments: 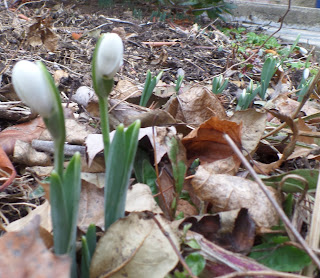 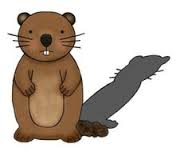 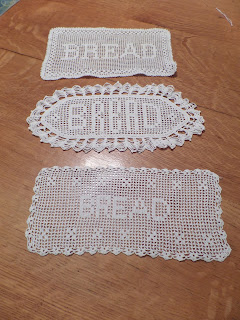 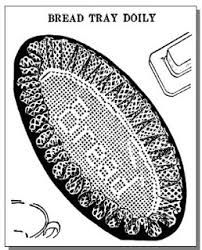 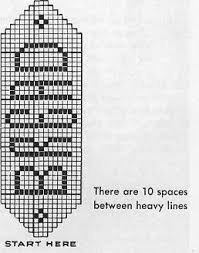 Posted by Michele McLaughlin at 8:32 AM 2 comments: