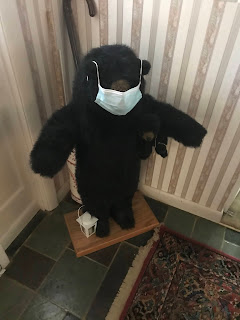 Mom's Bear, usually decorated for Halloween tells the whole story.
It's "I Like Thursdays" hosted by LeeAnna!  It's our attempt to fill the internet with positive energy! 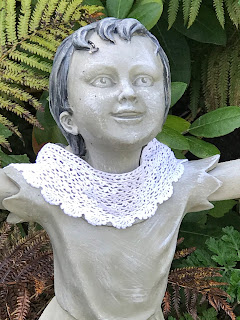 Gratitude to the life of RBG and tears for her passing.
I love that the fearless girl statue in NYC was adorned with a lace collar.  So I placed a lace collar on the statue of the girl in my suffrage garden. 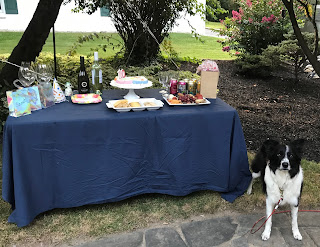 Scout's friend Mac hit 10 years old on Tuesday and was celebrated with a proper doggie birthday party!  It was hilarous!  We wore masks or remained socially distant.  It worked out well! 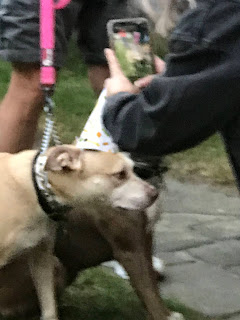 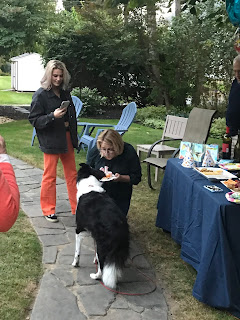 Scout and Mac have a special relationship.  Scout is somewhat like the 12 year old girl who wants the 16 year old boy to be her boyfriend.  Mac tolerates her and she follows him willingly.
Cake was a highlight of the party.
Scout was being a poodle and sniffing it delicately: 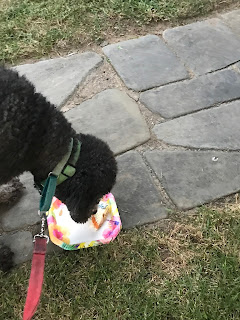 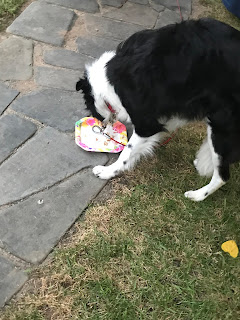 There were even gift bags--er doggie bags for the kids: 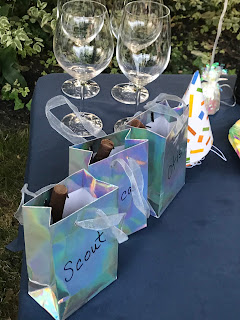 Scout sometimes doesn't want to eat her dinner.  I put some of the "Mac biscuits" in her food these days and she gobbles her food right up.  Anything from Mac has got to be good!
Today Mac needs some of your doggie prayers.  He got away from his owner yesterday and took a run.  He's found but has a limp and needs to see the vet now.  Your prayers are appreciated.
I like this meme: 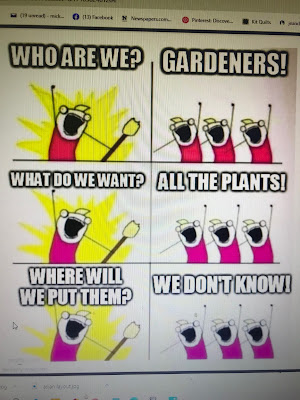 No I'm not rearranging the garden.  We desperately need rain and I've been removing all the vegies and annuals and just watering the plants I want to insure survive.
It was a good year for peppers, not so much for tomatoes: 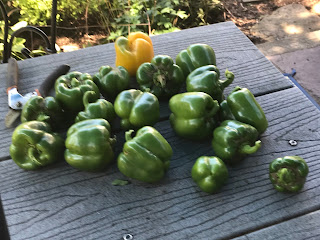 I like that my husband has a lot of time off for the rest of the year.  His company is insisting there will be no roll-overs of vacation time or overtime.  Hubby is most likely going to need back surgery and we'll be using his vacation time for doctor things.  It's not a fun thing to face but it's a relief that he can use up his days off for something important.
This morning I'm (again) rearranging our living room to make it safer and more functional.  The previous set-up isn't working for me and at this point, I'm afraid I'll fall doing things for him. 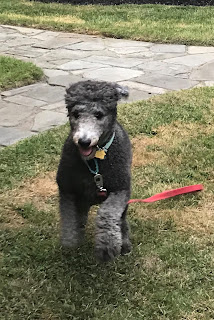 Scout says have a safe and happy day!

Posted by Michele McLaughlin at 8:59 AM

Hi Michele! That doggie birthday party is right up my alley. That's so cute that Mac wanted ALL of his cake. He's not a very good sharer - a skill we're working on with our littles. MY TURN is a big phrase around our house. I hope all goes well with DH. Back surgery doesn't sound fun at all. Not one bit. I love your meme! ~smile~ Roseanne

he wanted all the cake... me too!!! Love scout and she is as careful about food as Milo... sometimes we hear his stomach growling but he won't eat and we hold his bowl til he does. Best of luck for your husband's back...scary stuff. Don't you love a company who just changes your "benefits" like vacation time?

Looks like a bright spot in your week! I have a load of peppers, too, and am making Stuffed Pepper Soup for dinner. So much easier than doing the actual stuffing of peppers. When we lived in the Netherlands, I'd make a big pot of this and invite students over for dinner.

That gardener's meme is hilarious! I ALWAYS over buy bulbs.... Because SO MANY THINGS TO GROW! I love the doggie party, It sounds like everyone had a good time, and the masked bear is super fantastic! Good things in a sorrowful week.

Love that statue and those peppers are gorgeous. That’s smart thinking on rearranging furniture for both of you to be safe. I do that here for my brother because he has balance issues. Enjoy that garden.
Mary

Love the doggie birthday party, but poor Mac! I hope he'll be okay. Look at your beautiful peppers! I have shed many tears this week, not only for RBG but for our country. Again, like with President Obama, I didn't really appreciate all she did until recently. I hope your husband's back issues can be resolved soon!

I love that you added lace to your statue. Doggie bags - LOL. All the plants! ha. And all those peppers! wow. May the back surgery go well.

Scout is always a cutie!

Oh the doggie bday party looks like a doggone good time! Love your little girl with the RBG dissent collar. Wow lots of peppers. I was noticing that we don't seem to have many apples this year. Mine were nil, the wild one across the street is even bare.

Such a cheery post with so many happy photos. Good idea to rearrange the furniture. Good luck with the medical things. So sad about RBG. She was an inspiring woman.

My tomatoes did amazing but not so much my peppers. Interesting that yours was the opposite!

Way to see the good among the bad. If one has to have surgery, it is certainly good to have time off.

Lovely crop of peppers. I enjoyed reading about the doggie birthday party. Murphy is jealous! It seems like it will work out for your hubby to get his needed surgery now. Best do it while he can. Meanwhile, I hope you do not have mats or rugs around. They account for a lot of falls. A grandmother I know took two falls on the same mat, both requiring surgeries and I was so upset to think she hadn't gotten rid of it after the first time.

Hi,
A doggie party sounds awesome...love the gardening sign...so, so true.
Thanks for stopping by my place...have a great day!

So fun to have a dog birthday party! I hope your husband can get his surgery and use his time off. I love that you decorated your statue in honor of RBG. I'm so sad that she died. I know she was sick for a long time but it was still a shock.