Well it's Thursday and today me and my blogging buddies fill our corner of the internet with positive posts!  Our hostess is LeeAnna, be sure to check out other blogs for inspiration!

I'm grateful that my friends and family made it through Isaias safely.  We had a lot of flooding and most of our surrounding roads had to be closed off.  The flooding was worse than Superstorm Sandy and although we had high winds for a while the winds didn't do as much damage as Sandy had.  Water rescues had to be done in our neighborhood and down the hill where my brother lived, he saw parked cars getting swept up in the flood. It will be a while until many of our roads are open. 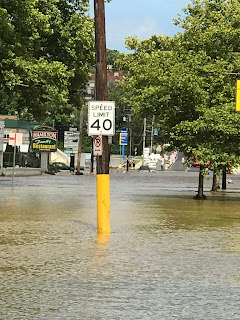 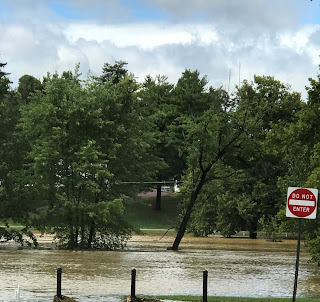 The lake is usually a few feet behind the trees in the foreground.

We only lost power, had flooding in the basement, and I still can't face cleaning up the garden.  But it could have been so much worse.


Caught in the act! 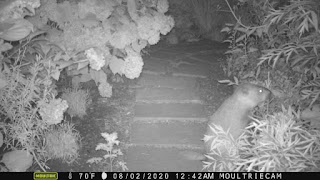 We now have a groundhog coming into the garden to eat our tomatoes.  He did a lot of damage to my flowers and tomatoes.  These photos of our wildlife are entertaining us and our neighbors; the neighbors think my ongoing war with the groundhog is hilarious.  This week I scattered garlic cloves around the tomatoes.   Apparently garlic is supposed to repel groundhogs as well as vampires.  Judging by last night's visitor, I would say that garlic doesn't repel Pepe La Pew: 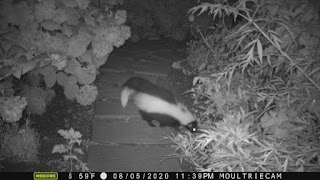 I like a clean sewing room.
Until the flooding of the basement began and we lost power, I spent time cleaning up the sewing room.  I finished yesterday morning. 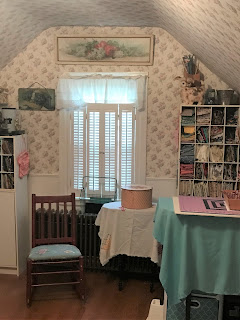 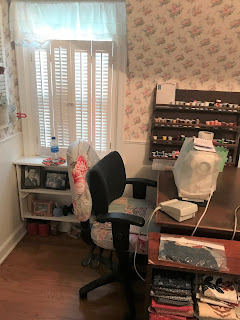 I don't have much else to report this week.  I'm just grateful that we have had another safe and healthy week.

Glad you made it safely through the storm.

Hi Michele! I'm so glad to hear that you guys are fine after the storm. I'm sorry for the flooding especially in your basement. Your sewing room looks FAB. So welcoming and inviting. Good luck with the groundhog, skunks and other varmints partaking in your garden. Annoying! I heard that peppermint deters many pests as well as cinnamon. Ants hate cinnamon - I sprinkled some on my hummingbird feeder and they all beat a quick and hasty retreat. ~smile~ Roseanne

I don't listen or read the news often. I knew of the storm, but not how bad it would get. Hope the basement clean up is negligible. I love your critter pictures. Oh your sewing space is lovely. Mine is a hot mess....well my whole house is, but it is bad too.

I hate it that you had basement flooding! It’s such a mess! Hopefully just cleanup and not much ruined!
Golly, what can you do about the night visitors? My brother, an avid gardener, says, “ God’s creatures have to eat too!” Your garden mush be extra yummy!

Oh no on the flooding, and especially in your basement! I'm so sorry to hear about that, Michele. It's way more fun to clean up the sewing room than a flooded basement! :) Your sewing room looks like a sweet and peaceful retreat!

good for you to keep your chin up... it's scary looking into the face of a storm. Rising water is very frightening too. How did Scout do with the noise and fear she must have felt? Your nightly visitors are coming out for a late supper buffet... who knew?!

It figures a skunk would like garlic! LOL. Good luck with the garden.

I just hate the idea of flooding.
Your super tidy sewing room is lovely. Daughter has a resident groundhog and bought a greenhouse to thwart him. A trail cam is so much fun and surprising to see what stops by in the night.

You got the storm so much worse than we did. I hope things are somewhat back to normal by now. I love your sewing room! It looks very inviting! I have no idea howto get rid of skunks or groundhogs. I had a skunk stuck in my garage once. I had to call a wildlife control company. They got it out but it sprayed in my garage. It took awhile, but the smell was gone after a little while.