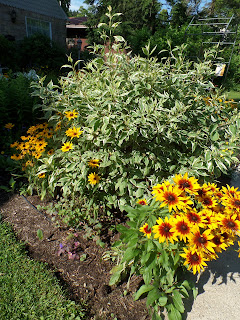 Good Morning!  It's "I Like Thursday" and time to post positive energy into the internet!  For more positive posts, check out our hostess, LeeAnna's blog for uplifting and inspiring news and notes!

First let's start with visitors in the garden!  I still haven't seen any butterflies this year which is very strange considering the amount of flowers we have blooming.  But we have had other visitors to the garden: 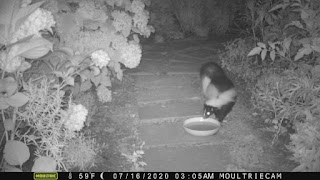 This fellow appears to be coming on a regular basis.  I know this because he has done considerable damage to my garden this year.  😒  That water bowl is actually there for the squirrels.  Around here, when it is hot and dry, the squirrels enjoy picking our tomatoes and taking a bite (for the fluid, I'm told) and then discard the fruit.  Squirrels have decimated whole crops of my maters and then a friend suggested leaving water out for them to drink.  The last year we did that, it seemed to work. 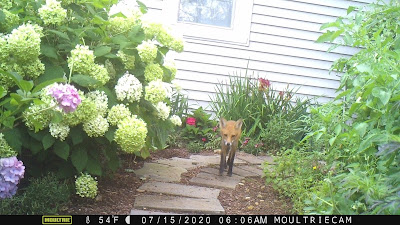 My brother and husband have now named it "Foxy Lady" and it appears to be coming into our garden on a regular basis and at all different times--10 p.m., 2 a.m. and  early Wednesday morning at 6 a.m.  I now check the garden before I let Scout out.  Our backyard has a six foot fence on three sides and we don't want Foxy and Scout to get into it if Foxy gets cornered. 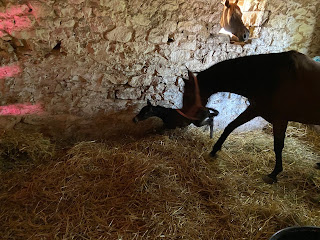 In other uplifting news, let me tell you the story of SloMo.  My best friend Linda is a horse woman and boards her horses at another one of our friends.  A pregant mare was brought to the farm because the owner herself was also about to give birth.  The mare gave birth and "SloMo" --the nickname the horse folk gave him--was born.  But SloMo had a problem.  He had contracted tendons and couldn't stand up.

Sounds like a sad story doesn't it?  Except it isn't.

The women came together and took shifts.  Every hour on the hour, they massaged his legs.  They milked the mare and fed him (not sure how you milk a mare but they did it!).  Then Linda told me they were massaging his legs every two hours but still milking the mare.  Then Linda sent me this photo.  SloMo had stood up for a whole 5 minutes! 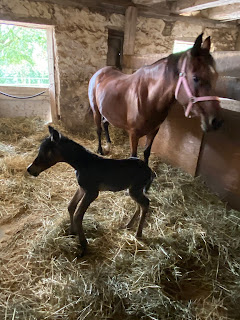 My husband and I have taken to call the women "the horse rescuers".  Imagine what else could be accomplished if people made some sacrifices and put their mind to making the world a better place!

I'll post again about sewing and such but today is for God's creatures great and small.  Have a wonderful day! 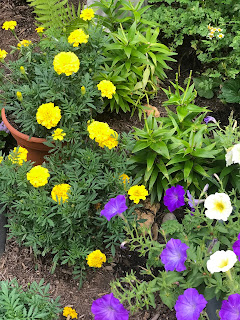 Posted by Michele McLaughlin at 7:13 AM

Hi Michele! What an uplifting post! And little SloMo. How sweet is that video, seeing him romp around like a baby colt should be doing. Gosh, that's a wonderful story - I'm so glad you shared it. And your gardens look fabulous. ~smile~ Roseanne

Yes, thanks for sharing SloMo’s story. Would’ve the world be a better place if we all could just be kind!

Your garden visitors are much more interesting than mine! We have had lots of butterflies and bees though which makes me very happy. My garden is all in the backyard, so I think the pups keep most things away except the occasionaly bunny. The story of the horse baby was so special! Have a great week!

I love your garden photos of the skunk and the fox! And the story of SloMo is wonderful! Loved the video. Hope you're having a wonderful Thursday, Michele!

That's an amazing story about the horse and I'm so proud of those ladies that made such a difference. A skunk...oh my! But I sure love that fox!

I've been debating all week about putting out a bowl of water for the critters - reading your post got me to do it! Great photos of your visitors. Yay for the foal!

Woohoo Slomo! I have bowls sitting out not only for the barn kitties while they are patrolling but the other critters. Love your flowers, and how cool with the fox!

Lovely post and wonderful video and story. I never knew that could happen to a foal. Horse Rescuers indeed. Love also to see your cam footage. Don’t want Scout to meet the skunk either. We usually had one run in a summer between the dogs and a skunk. With the dogs of course needing baths with special soap and the smell lingering in spite of it.

Those are remarkable women and I’m glad you shared their story. Keep all those beautiful flowers coming.

What a fun post! I guess the skunk was thirsty! There's a fox I see hanging around my neighborhood. I always keep my distance. So happy to see that horse running around! SloMo looks very fast!

I have chills over the horse and baby! Wonderful women, my kind of person!!!
skunks and foxes in the yard, yikes!!! Heaven knows what goes on out back when we turn in for the night... I've heard coyote screaming every night, seen critters out front.