Yesterday's emails about "I like Thursdays" remind me that I should have mentioned an important thing.  Milo--LeeAnna's new puppy over at "Not Afraid of Color" is actually Scout's brother. 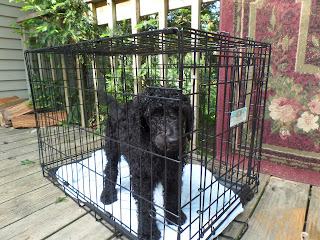 Milo, Scout's brother.  He really looks like our first puppy, Paddie.  So beautiful!
LeeAnna encouraged me to contact the breeder of her late son/dog, Cole after Seamus passed.  We were hoping to meet (LeeAnna and I) on Sunday but the breeder only told me that LeeAnna was going to be late (dang).  Of course there was a lot of chaos there as well Brad wanted to get home and I had a list of things I needed addressed by the breeder. 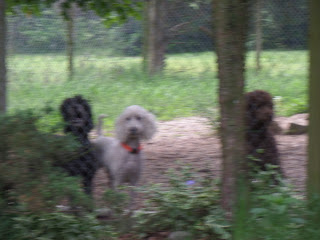 Bad photo but to the far left is Mama, then Dad, and to the far right is Grandma of our puppies. 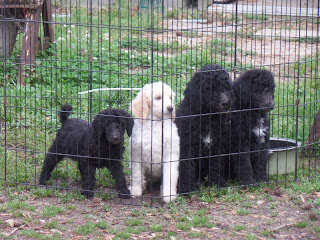 Some of Scout and Milo's siblings.  The runt is to the far left.

I cannot tell you how nice it is to have someone else dealing with puppy chaos.  Doesn't matter how many pups you raise, you forget a lot through the years.  LeeAnna emailed me yesterday that Milo now sleeps about 5 hours straight at night.  Scout is up at least two times a night (yup, 2  a.m. , 4 a.m. and 6 a.m. is the start of her day).  My neighbor has started calling me "Merle" because I look so haggard 😐

Brad was very enamored with the runt of the litter but we already know it is dang near impossible to train two puppies at the same time.  That's how we got Teddy, our white poodle (my mom learned that lesson the hard way).

As for me, I've learned to take naps with Scout at this point.  She does sleep nicely in her crate and we know that she has a tell.  She begins to dig a nest whenever she is tired.

Yesterday I was sorting wash and Scout decided to assist.  She thinks all dirty socks should be relegated to her bed: 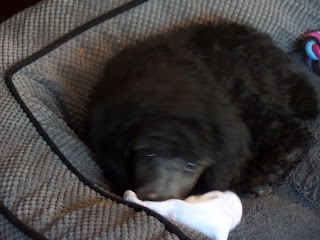 Some of you have picked up on her color.
She is indeed blue (a black turning grey/blue later).

Scout is napping so I am going to get a shower and rest.  Have a great day!

Puppy training is so intensive and you need so much consistency--and plenty of lovey-doviness, too. ;)))) I remember it well...cute cute photos.
those bros and sis. are adorable, too [e n v y ]...hugs, Julierose

Thanks for the great likes yesterday and Scout's update today. What a great name, btw. Oh these puppies are gorgeous. I know poodles are so intelligent too. Enjoy. And May is usually a great month here too...turning the corner with winter well behind. But the weather has been very wet and cold. No lily of the valley yet, I'm afraid. But enjoy yours!

ROTFL if you substitute the word "crib" for "crate" in this post, you can almost imagine that you're talking about a new human baby in the house!

Ah puppy training - I was 8 mos pregnant with my youngest and had a 2yo when we got two English Springer Spaniel puppies. I don't know how I kept my sanity. But I'm sure you're enjoying Scout no matter what - eh, Merle? ROFLOL!!!!

merle! hilarious. Noone but Drew has commented on how haggard I look. I remember sleeping 8 hours... so long ago... How do you know she's to be blue? I think blue is gorgeous. Milo sends kisses. I bet they would have a wag fest if they got together.