Sometimes we can learn so much from our pets and sometimes they truly touch us.  This past week as I was cleaning, I decided to pack some of Paddie's things up and take them upstairs to the craft room.  My goal is to make a shadowbox honoring her and the love she brought us.  I found a beautiful box and began packing. 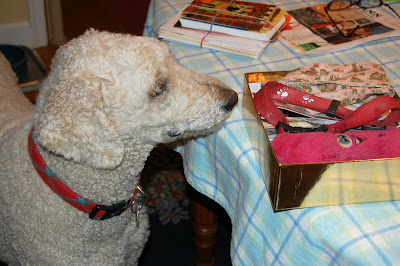 I wondered if we were sharing a common moment.  One box of Nana Betty's sewing accessories has a small plastic bag in it with some things she was saving: buttons, fabric, a few notions.  But when I open that bag, I can smell the scent of her home and it immediately comforts me and reminds me of all the love she showered on us.  I always close that bag right away, as if to preserve the sweetest of fragrances--which it is to me.

Teddy sniffed and sniffed but he is also my fragile child.  He is the dog that lives insecure, fearful, and can be aggressive because of it.  Paddie had kept him in line.  If he was really out of whack, she would push him against the wall and hold him gently there until he calmed down.  It got to the point in our world, that she would just have to stand up and the boys knew they better cool it NOW!  Seamus had gone back to playing but Ted stood guard over the box.  "That's enough boy," I gently tried to divert him but he wouldn't waiver.  I ended up closing the box and set it on the steps, closed the door, and returned to cleaning.

Teddy didn't resume wrestling with his brother.  Instead he paced and paced in front of the door that leads to the staircase as if awaiting her.  Inevitably, I had to take the box up the stairs because I am certain he could still smell her.

I have been told by some people that their dogs did not miss their dog friends after they had passed.  Strangely, to know that both Seamus and Ted had not forgotten Paddie and that Teddy was so affected helped me greatly with my own grief.  We are bonding in different ways now, not better or worse, but a different routine is being smoothed out and our lives continue. ..
Posted by Michele McLaughlin at 10:12 AM

Oh my, a very touching post. Our Zoey keeps the rest of the pack in line too. They come rushing, running into the house and she stands, barks and all settle down pretty quickly. Even bad boy Wonky has never stood up to Zoey.

I have 2 small bags of fur, 1 OBI's and 2, Lukes. ICE never met OBI but he spent 6 months of his puppyhood with Luke. During my fall cleaning the other day, I opened the bag of Luke's soft black fur to let ICE smell his brother's aroma. ICE's tightly curled tail almost wagged right off his body.
I so miss that Black gentle giant....so, I do know exactly how you feel as ICE knows Teddy's feelings too.
Quilting looks very tedious but I do own a singer portable and will be making a futon cover. I am thinking velcro for fastening a padded top to the 25 dollar, solid wood toy box I bought a few days ago from the care & share shop. It holds all of spoiled ICE's toys with some room for new Christmas goodies! Have a good Sunday and huggz to Teddy & Seamus, Holly

This made me tear up - funny how scent can evoke such emotions, isn't it? I have some things of my grandma's stored, and when I open them, I still smell her favorite scent.
I'm glad Teddy was able to help you grieve today....it's a process, a slow one, and we need to help each other through.

I'm sorry I missed when Paddie passed on. I wishe I had been here for you. I'm glad you've got the boys to help you through it.

My brother had a young great dane who died. They had taken him to the vet then brought him home as you did with Paddie. They burried him in their backyard in the country and their old lab went and layed on the grave everyday for weeks. They know, and they miss them!

I read your post to 25 Weeks of Paddie's passing and grieved for you and your family. Even now it makes me tear up.

For years after my Sophie died, Spike would perk up and look everywhere for her if her name was mentioned. And now both Sophie and Spike are gone. I miss those girls.