Something told the Wild Geese... 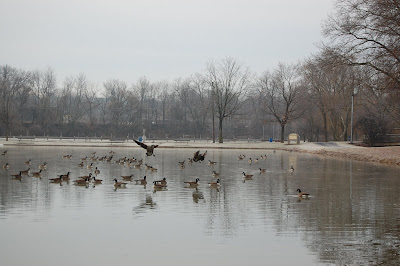 There's a great song/poem I like this time of year; it tends to be included in Christmas albums although actually it is a more about the autumn season. The first stanza goes:

Something told the wild geese
It was time to go.
Though the fields lay golden
Something whispered "snow."
This can be a wonderful haunting song, suited to the surreal stillness that precedes snow.

The thing is---no one told our wild geese here in the Lehigh Valley. Every time I drive buy the lakes in our area, I cannot believe how infested we are with water fowl. It's been a problem for years and doesn't seem to be getting better. I've read that this phenomenon is now referred to as "urban geese" (I'm am soooo not kidding). Geese have learned to reside year round at a number of cities, including ours. They polluted the lake and shorelines with their feces and made it a slimy mess. The geese honked and waved their wings at children as they walked by and were aggressive if nearby pedestrians had food.

About 15-20 years ago, the mayor spent a small fortune on swan decoys. The thought at the time was that swan decoys would deter the geese from staying since swans and geese are natural enemies. Someone forgot to tell the geese; they not only stayed with "woodie" but I now see a few swans existing near them--perhaps they all learned to get along.

Then the mayor decided to send the geese away--literally. A bunch were caught, tagged, and sent to some southern state where supposedly they wanted them. Like the cat who came back, the geese returned.

Someone used the geese for bow and arrow target practice about 10 years ago. The police never caught the poacher and the geese remained.

The city set off M-80s at the lake, hoping that the noise would scare off the geese. The geese stayed.

Large fines were enacted for people who fed the birds at the lakes. People respected the laws and stopped feeding the geese. Nothing changed.

The lakes were polluted with West Nile virus. Some birds died. The geese lived on.

I'm no fan of slimy lakes and I miss walking my dogs at those parks. Still, I have a bit of admiration for the resilience of this species. They have managed to humble all of us and not only adapt but endure despite us. In the last 10-15 years we have also seen a return of hawks, falcons and wild turkey to our area, who knows what will happen next in this city? Perhaps someday I will warn my grandkids that it is "a jungle out there" and I won't be exaggerating.
Posted by Michele McLaughlin at 11:16 AM

Hi Mickie, we have that trouble here too - they stop traffic all over the place, crossing the road.
Thanks for coming by and entering my give-away - I tried to reply but you're a no-reply blogger, so I came here. You never know, you just might win!
Hugs,
Allie