The Leash of Shame...

This is Teddy Von Barky. Teddy has two real problems: He is a food thief and he never shuts up. Teddy barks when he is happy, he barks when he is sad, he barks when he hears things (even my voice) and he barks when he is mad. We have spent THOUSANDS of dollars on training, gadgets and doo-dads--and he still barks all the time. It drives my husband crazy and then they are both barking: my husband in yells and teddy in woofs. It is very chaotic here at times. Still, my husband calls Teddy "his dog" and they are really good buddies (when they aren't barking).
Last summer I found something that helped. I slipped one of those cheap grooming/training blue nylon leads on him and told him that was his "leash of shame" for misbehaviour. Whenever he is out of control, I slip it on him and he has to go where I want, do what I want, etc. And oddly, this seems to calm him. My husband doesn't like this method, by the way. I think he (DH) feels that Ted should just listen, but heck, he is only an animal and an insecure one at that. 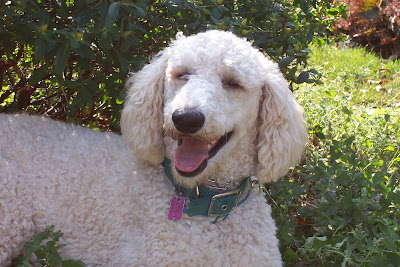 The other night we had thunder storms. Of course, every rumble brought barks from the Ted-meister. So I put the leash of shame on him, put the end of hte leash on my husband's lap and --voila!--Ted fell asleep under my husband's legs. All would be fine except then Seamus came into the picture...and sat in front of me whinning. He isn't afraid of thunder storms at all, generally he sleeps through them, but he is afraid he is missing out on something that Teddy has...

So I slipped a leash of shame on him too and he layed down on the opposite side of the ottoman and fell asleep too. And you dont' think they are like two kids? SHEESH!

Posted by Michele McLaughlin at 7:52 AM

Wonderful story, Mickie. You are the Poodle whisperer! Have you ever seen the Dog Whisperer on National Geographic Channel? I've heard Cesar say that dogs think you are joining in with them when you get loud while they are barking and it enourages the behavior. You showed calm, assertive leadership by putting on the leash and "telling" Teddy what was expected (and Hubby too!)

I think you are on to something with your leash idea, keep it up. Poodles are so smart and really want to please us, Teddy will figure this out. If he had issues before he came to your family it will take lots of patience on your part. We have an old rescue SP that had his bark box cut. SO sad his other people gave up on his training. He is a wonderful old poodle for us.

Ohh I love your post! I too have a barker.
His name is Dawber and is also a poodle.
It HAS to be a poodle thing the constant
barking. At least Dawber eventually quiets
down, but he will keep doing it under his breath, sounds like a worn down motor boat!
Love the 'cure' you found. We are still working on one! Take care! Melissa

That is so funny I'm sure it would take a real expert to figure out why that works.

I'm so impressed that you figured this out -- and the "Leash of Shame" is a great name. Lucy doesn't bark all that much, but occasionally she thinks she sees something in the greenbelt behind our house and won't stop barking. Usually, I shout at her (which doesn't work at all), but now I'm going to try your calm approach.