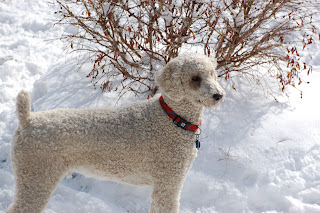 Sometimes I think we should have called Teddy a different name like Calvin. Then we could nickname him calamity Cal. Ted just got cleared by the vet to go back to Woof World which means I can do day trips again!
Ted had been diagnosed at the beginning of the month with the equivalent of doggie chicken pox. The vet said only about 20 percent of dogs get it but of course, Ted would and other two didn't. Then he developed an eye infection which we are hoping is not due to allergies (hence raccoon eyes in the picture).
But he is clear now, clear of puppy pox, eye infection and ready to rock and roll with the big boys. :)
Posted by Michele McLaughlin at 8:05 AM