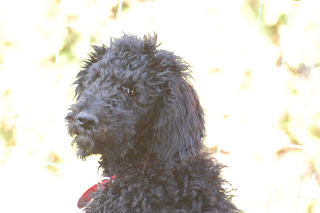 Yesterday I picked up the puppies from Woof World and Melissa told me that Seamus had done a wonderful thing. There has been a very VERY large Great Dane that has been coming to the center but he wouldn't play with others--perhaps he is shy or intimidated. The other dogs leave him alone since he is the size of a small horse (notice I said horse not pony). But yesterday Seamus had enough and he began to perform his magic on the Great Dane and by 4:00, he had the Dane playing with him. Melissa was so excited and I felt that special Seamus glow.

Seamus is my amazing magical dog. Each of our dogs bring something special to our home. Paddie is part of me, like my shadow, we lived together alone for so long. Teddy needs us and he is beautiful so it makes up for his (sometimes incessant) barking and his fearfulness. And Seamus...Seamus is my magical boy. 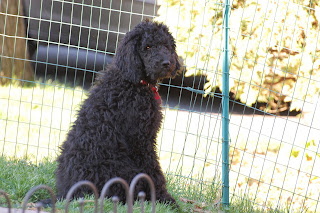 He has the most interesting countenance. All dogs like him, none ever seem to be intimidated by him and he is the dog you want to have around puppies because he is nice to them. He is sweet to people and he doesn't bark much, although he yowls (only way to put it) when he is excited to see someone or has just been left out to play. He also hops up and down like Tiger which is delightful. He loves kids and even when he was young, he would just sit there and gently lick Helena's hands. 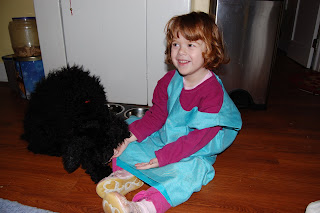 I often wonder if his magic comes from the fact that if it wasn't for us and our vet practice, he would be dead. On the day I found him, I was supposed to be looking for antique quilts but I found a puppy instead. He was from that area of Pennsylvania where there are a lot of puppy mills and when I saw him, he had a weird white stuff on his nose. We thought he had a cold. But within two days, he was unable to move at all. He had bronchial pneumonia and couldn't even stand or hold his head up.
The entire vet practice descended on our puppy and they had us come in to the office twice a day so he could get his IV of fluids, meds and nutrition--he was too sick to even drink water. They even opened up the office on Easter so we could bring him in for his IVs. They saved him and I guess so did we. 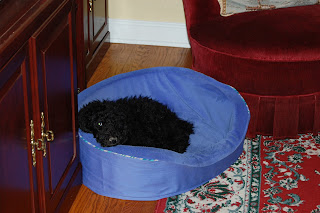 And the magical thing is......he knows it. We all thought he would hate the vet after all the needles and work they did. At the time he would cry and he had so many holes in him from the needles that his IV would drip our of them.
So it was amazing to see his reaction when he got better. When we go to the vet, he starts yowling and hopping and breaks free to visit everyone in the office. It's like he's saying, "Honey, I'm home!!!!!" He goes around kissing everyone and whinning with joy. And the staff love him for it. They treat him differently than my other dogs: Seamus is their dog too.
He is my least trained dog and yet one of my easiest. He seem to understand that it isn't important to sweat the small stuff, that life is rich enough if you just let joy come to you, that being kind is its own reward. That is why he is my dear dear Seamus.
Posted by Michele McLaughlin at 8:26 PM

aww your post made me tear up. I just my cats as much as you love your dogs. I am glad that you have each other.

This is such a sweet post. I really enjoyed reading about your fabriholic granddaughter but this entry got to me. I just happened to read about some rescued dogs from a puppy mill in MO. I hope they all find wonderful homes like Seamus did. He sounds like a great dog.