I'm hoping for a quiet weekend. Things here have been chaotic and I would like to get some sewing in if possible. 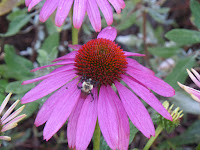 Scout went into the vet to get spayed on Wednesday.  She was supposed to get fixed earlier in the month but then the ER said that my arm was broken and it was set incorrectly.  I cancelled the spaying and also some lectures anticipating that I would be restricted by a cast.  WRONG.  By the time I could see the orthopedic, I learned the radiologist report was incorrect --REALLY incorrect.  I wasn't broken or requiring the surgery my husband predicted.  So I lost money on cancelled lectures, had to reschedule Scout's spaying, and have been generally annoyed by this whole situation. 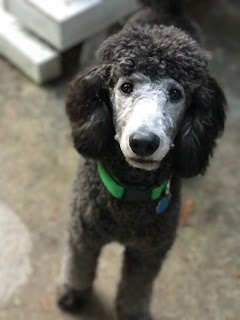 My brother and others have been advocating to wait on spaying Scout because there is now some medical thought on the benefits of waiting.  However, I live in a city, in the middle of a park region and two houses from a rat terrier stud.  I DO have to worry about stray dogs that are dumped in the park and irresponsible dog owners.  I don't want my sweet 8 month old puppy to get pregnant and I certainly don't want puppies.  Ultimately, the vet said the prevailing medical thought is that the pros and cons are about equal.  So I rescheduled Scout's spaying for the next available date, last Wednesday.

I've been on pins and needles that past week worried that she would go into heat and breathed a sigh of relief when we dropped her off.  Generally I have good instincts and this was another time when those instincts were correct.  The tech vet said "have you noticed any of these signs of heat?" and I hadn't.  But I also told her it wouldn't surprise me if the vet told me she was going into heat.  I held my breath and hoped for the best.

The doc called early in the afternoon.  He had checked her for signs of heat and hadn't seen any.  Scout was put under anesthesia, shaved, and then ....they found she had a bladder infection and there was ACK, a sign of bleeding at her vulva.  The surgery was cancelled and we picked up Scout after the anesthesia wore off.  Yeh I had to pay for the anesthesia, etc. 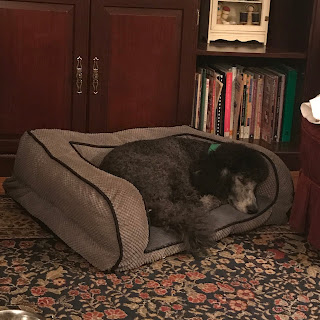 So now our girl is in heat and boy is this a pain!  I've had to cover everything in my house (the bleeding isn't that bad but still).  We tried a diaper on her but it traumatized her even more and we gave up on that.  The whole process is longer than I knew.  After this ten day phase, we have to worry even more about her getting pregnant.  I've read that dogs generally don't want to mate during this first phase, it's when the second phase begins (and no spotting) that instinct kicks in to mate (another 10 days).

Scout can only be walked during low dog traffic times and even so, I'm carrying pepper spray with me just in case.  The good news is that she is getting along better with my Mom's poodle, Greta, and they are playing every morning. 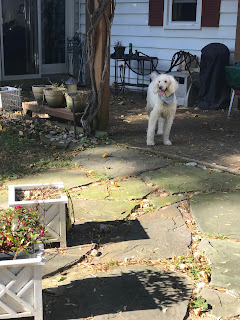 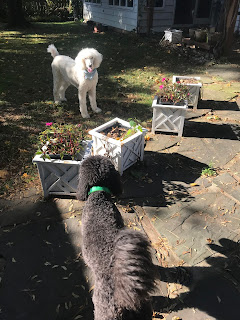 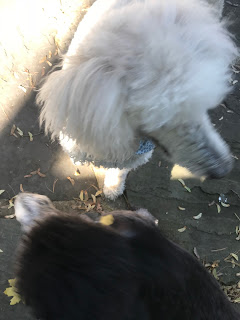 Scout is still a teeny weeny puppy.  She only weighs 36 lbs (versus Greta at 79) but the vet is confident she is 85 % grown at this point.  She will just be a smaller standard poodle.  She seems to be responding well to her antibiotics and I am keeping an eye on her for infection as well.  She appears bewildered by what is going on inside of her and is more clinging.

We will get her spayed after Christmas and for now, we are just dealing with things as best we can.

But I'd be lying if I didn't admit:  I'm still really mad at the ER hospital.

Posted by Michele McLaughlin at 8:15 AM

I feel your pain! The vet here told me that I should wait until my pup Sadie is NINE months old before I have her spayed......! ACK!!! I'm a little luckier than your situation, because I am in the middle of my own five acres and only have to worry about the three neutered males who live here. Yes, that is pesty as well, but not as much a worry.
Sorry you had to go through all the other medical ups and downs! Very frustrating indeed!

Wow - well it's good news that your arm isn't broken, but golly the trauma involved! Praying for you and Scout!

Oh dear - you've been going through the ringer with your arm and with Princessa Scoutessa ... I wish everything could get settled (correctly, even) so you could get back to enjoying your work and your girl. At least you don't have to worry about Scout when she's playing with Greta!

oh for pete's sake.
What revoltin' predicaments.
85% grown. That means Milo will be much smaller than Cole. He is 50 lbs now. Cole was between 65 and 70 grown. Milo is tall but really skinny and I feed him on demand. He eats what he wants and leaves the rest so I guess this litter is just smaller. Scout is a pretty girl, and I love the name Greta too. LeeAnna