We've had quite a wildlife week here!
Bird on a Wire:
Last week I was puttering around the garden when something landed above me.  It was a small hawk and he didn't move when he saw me below him. 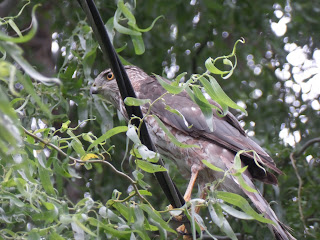 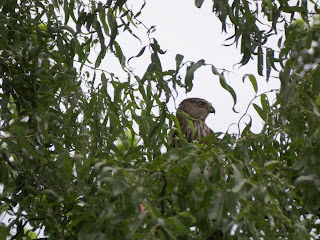 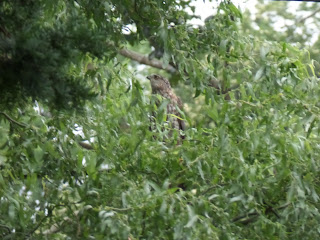 He was so close!  It is a low wire.  I couldn't believe he wasn't leaving.   When the storms started and we was still there, I told my husband "that one is in trouble."  He was.  We found him under the wire the next morning.  We don't know if he had some kind of illness or if he had been attacked by crows (common around here).  Either way, it made me sad.
Turtles at Second:
So on Sunday, I took Seamus to the baseball fields for a nice walk.  Our friend Mary and her dog Bindy were there.  They are our neighbors and the dogs get along well.  Mary was upset because she had spotted a large turtle on the baseball field and she was afraid it would fry in the heat. 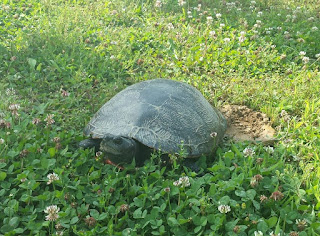 Because there are a lot of snapper turtles here, I asked my husband to return to the field with me so we could move the turtle before the neighborhood kids come along and possibly get their finger cut off. :(
Fortunately, it was a box turtle and she was in distress but not the kind Mary imagined.  She was laying eggs in the sand! 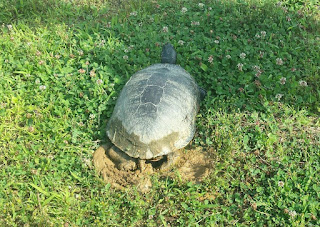 It was fascinating watching her and when she was finished, we helped her get back to the creek. The field is weeded over but there was still good sand under the grass.  So we have a batch of turtle eggs incubating at second base and we will keep an eye for when the little ones hatch (2-3 months).
Otherwise, I am doing some sewing but mostly absorbing as much outdoor time as I can.  There is always work to do in the garden and I'll post more photos of the garden tomorrow.
Have a great day!


Posted by Michele McLaughlin at 9:10 AM

WOW who knew that getting to second base left you expecting? LOL! I'm glad momma turtle was having the *good* kind of stress - I hope her babies do well when they arrive - you'll have to keep us updated as to their status :D Sad about the hawk, though :(

omg, poor hawk... and the connection between y'all and the turtle mom... you must put up photos when the turtlets come out. Leeanna