What a difference 12 months can make!!! Iwas just going through some photos of the dogs and check this out, this is Seamus and Ted in April 2009. Seamus is the biggest dog, people (including the vet) look at him and ask me what we are feeding him!!!! 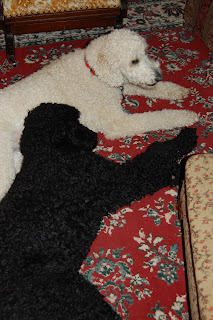 And this was Seamus in April 2008! What a difference! Seamus and Ted have been best buds since they met and they still love each other and are brothers in every sense of the word (including competing and an occasional although mild scuffle). Their relationship has been so interesting to watch! Seamus has always wanted Ted's attention and when Ted is distracted at barking at whatever is bothering him, Seamus runs around him nipping Ted's tale trying to get his attention. Eventually, Ted gets annoyed, chases Seamus and bites Seamus' tale. Then he goes back to barking, Seamus runs around him nipping his tale.............it is all very fun to watch! 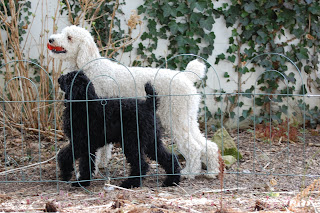 Posted by Michele McLaughlin at 8:33 AM

Heehee! Mom was looking at pictures of me a few days ago when I was Really Little - smaller than TaiChi (I was 10lbs and she is 18 - now I'm 60lbs). I love old pictures!