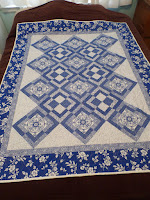 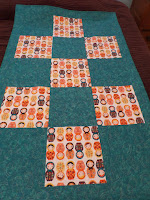 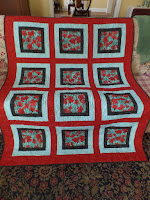 Whenever I have a productive year of quilting, I like to take stock and assess what I’ve done and the impetus for finishing projects.  My neighbor (and sewing buddy) Carol has been asking me for months how much I’ve completed but I didn’t really care enough to count.  I was too busy sewing.  This year I’ve managed to complete 21 projects (more than half were laptop quilts) plus premie quilts and another 11 tops. 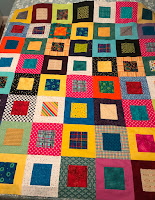 So here is my list of personal reflections on this past year.  I want to remember what I learned so that I can return to this when my creative mojo is off. 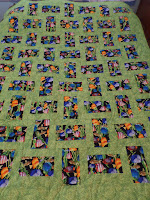 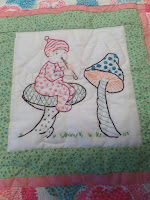 Sewing as Therapy
I had made a list of why I think it was a prolific year but when I was talked to my neighbor he pointed out that I had forgotten the biggest reason:  I was very anxious. 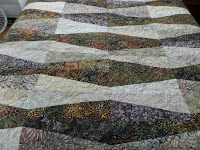 2017 has been a year of tumult for our country and the world.  I’ve done what I can to support the causes I believe in and contacted my federal representatives so many times they probably know me by name.  But it wasn’t enough.  So I sewed. 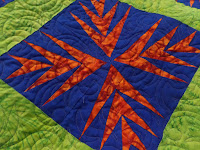 Checklist
I love lists.  Even more, I love crossing things off lists.  Anyone who has knows me realizes that my best sewing years are the ones when I participated in UFO challenges.  I joined two this year:  the first was a challenge put out on Facebook by the American Patchwork and Quilting Magazine.  Then my guild initiated a UFO challenge and I joined that as well.  I had three pages of projects that needed completion.  I finished about 70% of my quilts. 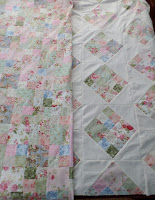 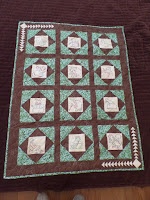 Structure
This year, I was on the computer less, used LeeAnna’s project of “I like Thursdays” as a time to blog, and limited television (news until 9 a.m. and then relax and watch tv after 6 p. m.).  I allotted two days a week for cleaning and errands. 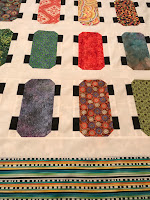 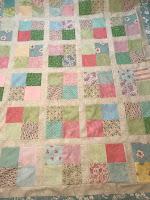 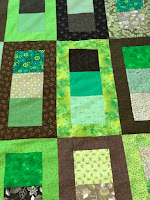 Flexibility
Flexibility has been a big battle for me.  I’m very understanding towards others and hard on myself (bet that sounds familiar to some of you).  I have not mastered relaxing my own self-expectations but I have improved a wee bit.
The project list is not the alpha and omega, instead the process became my focus.  First time feeling:  There were tops like this one (below) that I closed the sewing day very pleased because I wasn't  finished!  I was just enjoying the work.

A finish is a finish.  It doesn’t matter if it is a placemat or full sized quilt. 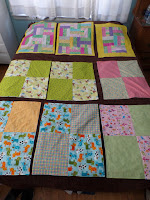 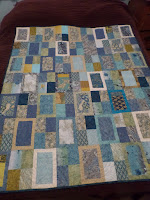 It’s okay to do the same thing more than once.  This was a tough lesson for me but now I find that is comforting because I can just concentrate on piecing.   So for example I began the blue underground quilt as a gift for Jana May (see above); everyone that saw it wanted one.  I decided this was great because I would make enough tops to use up all the fabrics plus I incorporated other fabrics from my stash and Voila!  5 tops completed; three of which are already finished and gifted.

This also applied to quilt patterns.  I usually only do one type of quilt and then go to the next thing.  But this year, I did two tops of Missouri Star's two step quilt, a few square in a square quilts (love these for scrap and donation quilts),  and the pattern I made for two Camp Erin quilts. 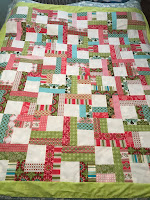 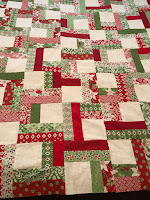 Goals are malleable.  Years ago I bought a layer cake called “Origin”.  It was the fabric I never wanted to cut because I loved it sooooooo much.  A year or two later a friend helped me pick a grey fabric that I was going to use with it.  Well guess what, the grey no longer appealed to me and to make matters worse, I couldn’t find the original pattern I wanted to use. 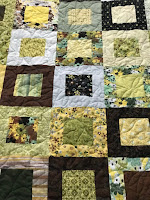 By the time I got to this project I just didn’t care anymore.  I had been moving the fabric for years and wanted it used up. 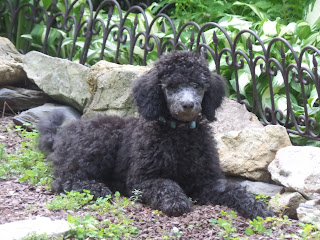 Life happened.  We lost Seamus after Christmas.  We adopted Scout the last day of April.   I didn’t sew in April, May, or June.  I was exhausted.  Scout was up every two hours every night and I just needed to focus on getting Scout acclimated and settled.  I had to slow down my sewing again in September when Scout took me for a drag and I had an injured arm.  Projects that were to be completed for the holiday won’t be done until the new year and that is okay.  A gift is a gift and it doesn’t matter when it is delivered.

On the business front, I did complete and introduce a new lecture called "Designs Still Worth Doing:  A Celebration of Ruby Short McKim" which has been popular with the guilds that have seen it.  I also started working on my sewing themed stationary, Nine Patch Notes. 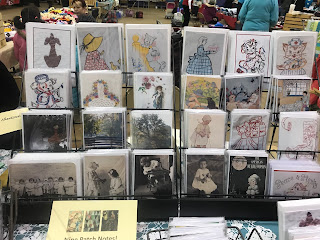 Hal Borland wrote that "Year's end is neither an end nor a beginning but a going on; with all the wisdom that experience can instill in in us."  I'm hoping to incorporate some of the lessons of 2017  during my quilting journey of 2018.

Posted by Michele McLaughlin at 12:43 PM

Wow, Michele, what a wonderful post chock a block with thoughts and projects. I had no idea how prolific you are. Of course, I identify with many of your thoughts about things. It must give you great satisfaction to see how much you have achieved and such a happy poodle in the mix too! A wonderful 2018 to you!