The End of an Era

Molly:  1995-2011
It's the end of an era for us.  Darling Molly passed today into a more peaceful place.  She was the dog that everyone expected to pass first (having been diagnosed with Crohn's disease about 5 years ago).  Paddie's dearest friend, she outlived Paddie and all of Paddie's contemporaries.  Up into a month or two ago, she was still going up and down the steps and asked me for a walk only two weeks ago.  She had a good life and I know that my brother Jim will miss her terribly as we all will. 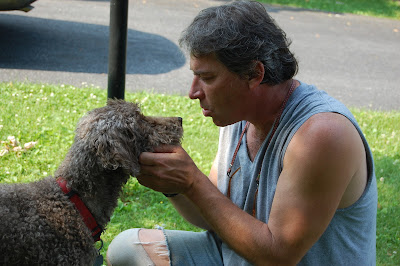 Molly was one smart dog.   Bilingual, she had learned commands in both English and German (because my son took German in high school).  She and Paddie developed various games and was known to be able to hunt for a toy specifically-- be it duck, ball, lamb, cat, etc.  When Paddie broke her front leg, she adapted a game for them to play.  Instead of both chasing the ball, Molly would get it, drop it onto an ottoman where Paddie could reach it and allow Paddie to be the official "retriever."  The two dogs adored each other. 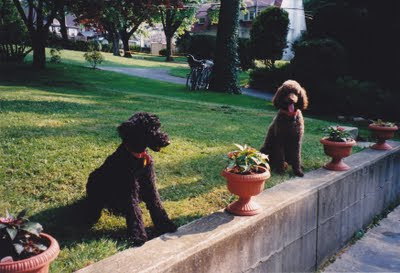 Molly liked rabbits and was known to protect the nest the bunnies made in her backyard.  She was a true poodle in every sense of the word and our lives were all made better by having her in our family.
I know she is playing with Paddie now and they are finally together again.  Thank you Molly for the love and joy you brought to all of us.
Posted by Michele McLaughlin at 11:02 AM

Mickie this made me cry, yes I'm sure Molly and Paddie are chasing each other around in complete joy. I'm so sorry - give your brother my condolences.

RIP Molly (I have tears in my eyes as I'm typing, as this is sad but such a lovely tribute) - you were obviously well loved, and imagine the fun you'll have at the Rainbow Bridge with Miss Paddie!

*hugs to you* We'll light a candle for you tonight, Molly.

Sory for your loss. They do tug at our heartstrings and we love them dearly.

Mickey, I am so sorry for your loss.. They are so very special....

The hardest part of loving these furballs of star-and fairy-dust is when we have to let them cross the Rainbow Bridge without us. Hugs.